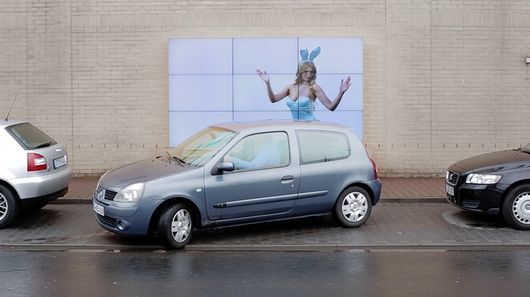 In the following examples, we’ve included a mixture of static, traditional and digital billboard ads, which take it to the next level in attempts to push user engagement. Expect interactive elements, pyrotechnics, loud noises, smartphone interaction and multi channel marketing techniques.

Parking in busy, built-up suburban areas is a real challenge to the modern driver. To demonstrate how easy it can be made with the integration of technology,  Fiat created the Parking Helper Billboard.

Using ultrasonic sensors built into Fiat car’s bumpers, this smart billboard guides drivers into spots which would seem impossible without its help. In order to visualise the instructions on the billboard, Fiat showed people onscreen to accurately display the space available to drivers with their hands.

This advertisement is useful, relevant (as it tackles a modern day issue) and is a playful way to promote the features of parking assistance technology to drivers who may be unfamiliar with what is available on the market.

A complexly high-tech pet adoption campaign ran in a shopping cantre. Created by OgilvyOne and called #LookingForYou, the interactive ad was created to increase pet adoption at ‘Battersea Dogs and Cats Home’. OgilvyOne collaborated with Exterion Media for the project.

Flyers were produced that held a small computer chip, distributed to visitors at East London’s Westfield Stratford mall, each time a flyer owner passed a screen or electronic billboard in the mall, a cute pup would appear on screen. Detailing the dogs name, the personalisation of the ad made sure to tug on the heartstrings of shoppers.

The first ever use of such innovative technology, the tactics are an impressive leap for digital screens.  The first pooch starring in the on-screen pet adoption campaign — named Barley — has been adopted, which is a defining ode to its success.

Getting people on board with donating their blood can (at least initially) a big challenge. Publicis Sao Paulo and Fundação Pró-Sangue had an experimental way of getting people to think about it.

Placing boards that doubled up as phone charging stations in public areas where people were likely to be running low on juice, they figured out a way to really make people stop and listen.

People were able to plug their phones to a red-colored cord, made to look like the equipment used to drawing blood from someone’s arm on the poster.

The chord is made to be purposefully short, so you have little option but to look at the poster and (presumedly) digest the information on it. The poster contains an encouraging message: “If you need, we’re here for you. Why not return the favour? We need blood.”

Coca-Cola, renowned for being the big boys in the advertising world, continually employ new, exciting technology to surprise and delight consumers. This is definitely apparent in the brand’s newest ‘Drinkable Billboard’ campaign.

In this series of advertisements, Coke Zero was promoted through Shazam and Augmented Reality techniques. Coca-Cola used posters, billboards and commercial advertisements, encouraging people to: “Shazam now to drink.” Following this direction, an ice cold glass appears on the screen of the user’s smartphone, making it possible to sync with the image of Coke being poured to virtually ‘fill up’ the glass. This kind of reminds us of the early iphone app iBeer, but much more advanced and with actual physical beverage shaped rewards.

As well as being treated to exciting visuals at home or at a concert, participants were rewarded with a free voucher for a real Coke Zero that could be traded in at retail stores across the United States.

European Voyages travel agency is using the the natural draw of the human body in its various parts, shapes and forms to their advantage. Creating 3D interactive billboards of oversized parts of the body, the billboards were unmissable and sparked a lot of humour.

Placed in various Parisian locations, the billboards include a giant mouth warbling opera, Marilyn Monroe’s iconic legs with accompanying white flowing dress, a soapy rugby player, and a hairy, disco dancing chest. The advertising campaign is part of a ticket deal from Voyages travel agency, which promotes a train and show tickets deal. Dubbed ‘Instant V,’ this campaign means to bring people closer to their passions.

In order to promote the ICE&FIRE Becherovka liqueur as one that delivers the hot and cold sensations that its name promises, an interactive billboard ad was set up. One that spews both fog and flames into the air is really a sight to behold.

In order to get the billboard going, Jan Becher required an element of audience participation. When people tweeted the #IceAndFireCZ tag, or liked the live stream of the billboard in action on Facebook, the billboard would emit icy smoke and throw flames into the air.

Toronto City was treated to a slew of interactive ads for Tattoo removal company ‘Fading Fast. Created by the Canadian ad agency MacLaren McCann, the ads are a clever way of showing just how easy removing tats can be. The agency set out to prove this notion by creating posters of tattoo covered people that could be de-tatted with the pull of a tab.

The “tattoos” were actually vouchers for the removal company. Pedestrians could walk by, peel them off and be offered 50% off their tattoo removal. Though it may not be literally as easy to remove tattoos as the posters make it, the 50% discount makes the process a little easier on the wallet.

To promote its newly launched Intense hydration range, Burt’s Bees used an interactive billboard to showcase a before and after image of the effects out its new, super hydrating products.

This clever use of design and construction meant that the ‘before’ image literally ‘flaked’ away as viewers peeled off vouchers acting as a layer of flaky skin on the board.

After all the vouchers were removed, all that was left was a shiny, super-moisturised woman beaming down. Promoting the effectiveness of its products, whilst engaging through interaction, and offering a discount was a sure fire way to entice consumers to Burt’s Bees stores.

These billboards designed by the team at Advico Young & Rubicam in Switzerland display exactly how sometimes less really is more. Each billboard shows a zoomed in image taken on one of their 12 x zoom Leica V-Lux 1 camera and features the object directly behind it. The advertisements perfectly display the quality of the camera whilst aesthetically blending with the surrounding site of each board.

Whilst we mainly offer traditional billboard sites around Leeds, we also have a whole host of other advertising options. We are open to creative ideas and are excited at the prospect of adding interaction and user engagement to our sites. If you have an idea you’re dying to discuss, and want a personable service, that offers printing, construction and erection, contact us today on 0113 231 1774.